Overdose Stats for 2017 Are In: Drug Deaths Are Breaking Records

Early estimates suggest that 2017 is the deadliest year yet for drug overdoses in America. Some 72,000 people died—that’s 200 people a day or one death every eight minutes. This means drug overdoses in 2017 killed more people than guns, car crashes, or HIV/AIDS ever did in a single year in the US. By comparison, at it’s worst, the HIV crisis led to 43,000 deaths in 1995, while in 1972, car crashes killed a record-setting 55,000 people in the country. Alarmingly, these dark statistics represent an increase from 2016 figures on overdose deaths released by the Centers for Disease Control (CDC)—which itself was a record-setting year. 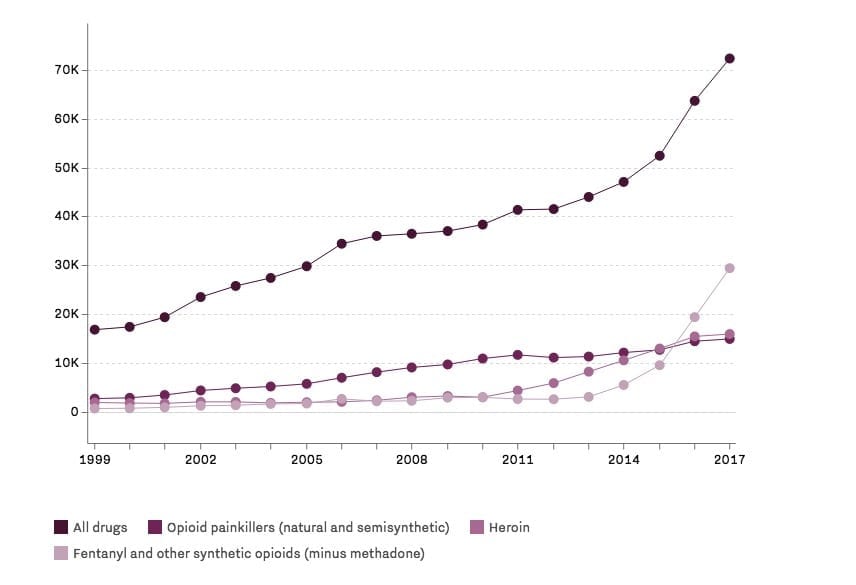 The opioid epidemic is driving the record-setting numbers of overdoses, with the synthetic opioid fentanyl being a heavy contributor. The drug is cheap, easy to make, easy to transport, and increasingly being mixed with heroin and other drugs. Because of its unprecedented strength—some 50 times more powerful than heroin— it can overwhelm even experienced drug users, leading to overdose. In certain markets, the mixture of synthetic drugs added to heroin changes frequently, further increasing the risk to users.

Despite this bleak picture, the data indicate some scattered reasons to be hopeful. States that invested in addiction treatment and other interventions saw declines from alarming death rates, indicating that treatment works and all is not lost. For example, in Ohio, home to one of the worst-affected counties in the country, the health department recorded a reduction in OD deaths following a state-led campaign to reduce opioid prescribing, and increase access to additional treatment and anti-overdose medicines like Naloxone. Massachusetts, Vermont, and Rhode Island launched major public health campaigns and increased access to addiction treatment and saw corresponding drops in the overdose death rates. Early statistics from Massachusetts indicates these interventions have had meaningful impacts.

But We’re Not Out of the Woods Yet

Despite the promising signs that increased access to drug treatment works, there are concerns that the epidemic could intensify elsewhere. Fentanyl most commonly effects drug supply east of the Mississippi, where it is more easily mixed with the white powder heroin available there. Public health officials report that there are early indications that distributors are finding ways to add fentanyl to the black tar heroin found on the west coast, which could lead to an explosion of overdose rates there.

View From the Front Lines

The National Institute on Drug Abuse  (NIDA) reports the length of time someone spends in a treatment environment can directly influence their continued sobriety. Studies that tracked treatment outcomes over longer periods found that “most people who get into and remain in treatment stop using drugs, decrease their criminal activity, and improve their occupational, social, and psychological functioning.”

Like other chronic illnesses, addiction can be managed successfully. Treatment allows people to interrupt addiction’s powerful disruptive influence on the brain and behavior and to regain order in their lives. At Scottsdale Providence, we are invested in rebuilding lives. In addition to helping people get clean and sober, we work to give our clients a foundation in recovery that will enable them to return to vital positions in their families, workplaces, and communities. We are honored that our work here saves lives, and will continue to practice what we know works to fight for every person who walks through our door.

Graph Source: The Centers for Disease Control and Prevention

Christina Rock is a Seattle-based writer and photographer.

GET HELP
It's not the end. It's the beginning.
VERIFY INSURANCE
GET MORE INFO
Is it Dangerous to Withdrawal from Benzos?
What Is Cognitive Behavioral Therapy?
Choosing the Right Scottsdale Treatment Center
May Is Mental Health Awareness Month
An Overdose Every 5 Minutes in America: The Latest OD Stats are Staggering
The Family’s Role in Alcohol and Substance Abuse Treatment
What is EMDR and Can it Help You?
Signs a Loved One May be Addicted to Pills
Stages of Withdrawal
Managing a Co-occurring Disorder in Recovery
What Does Evidence-Based Rehab Treatment Mean?
Mental Health Outlook Remains Grim Post Pandemic
Do’s and Don’ts of Early Recovery
Are We Having Fun Yet? When Early Recovery is Harder Than You’d Like
Why You Should Take Slowing Down Seriously
Are the 12 Steps Enough? Debunking the Stigma of Outside Help
5 Ways to Develop An Attitude Of Gratitude
Keeping Recovery Fresh
What to Expect in Treatment
Old Friends or New Life? Choosing Right Relationships in Early Recovery