The Problem on the Street: Fentanyl and The New Face of the Opioid Crisis

The opioid epidemic continues to rage across the country, with a record 72,000 drug overdose deaths estimated in 2017, up sharply from the previous year, which itself was record-breaking. The statistics are heartbreaking, and often leave us feeling powerless in the face of the tidal wave of addiction. We wanted to help anyone affected better understand the current state of play. Read on to learn more:

Getting Our Facts Straight

News headlines announce daily the dangers of opioids and opiates and the devastation they wreak on families and communities. But few actually know the difference between the two. Here are the facts:

Although subtle, the distinction between opioids and opiates is significant. An opiate is a drug naturally derived from the opium poppy plant. Examples of opiates include heroin, morphine and codeine.

Opioid is a broader term that includes opiates and refers to any substance, natural or synthetic, that binds to the brain’s opioid receptors – the parts of the brain responsible for controlling pain, reward and addictive behaviors. Examples of synthetic opioids include the prescription painkillers hydrocodone (Vicodin) and oxycodone (OxyContin), as well as fentanyl and methadone.

The Deadly Rise of Fentanyl

This brings us to the sharp uptick in the use of fentanyl, and the onslaught of related deaths. Remember our recent post on the latest staggering overdose stats? These figures were underwritten by the sudden ubiquity of fentanyl.

Since 2011, fatal overdoses from prescription painkillers alone have remained relatively stable, but those involving fentanyl have skyrocketed. The far more lethal drug played a part in 60 percent of opioid deaths in 2017, according to the National Center on Health Statistics, up from 11 percent five years ago. 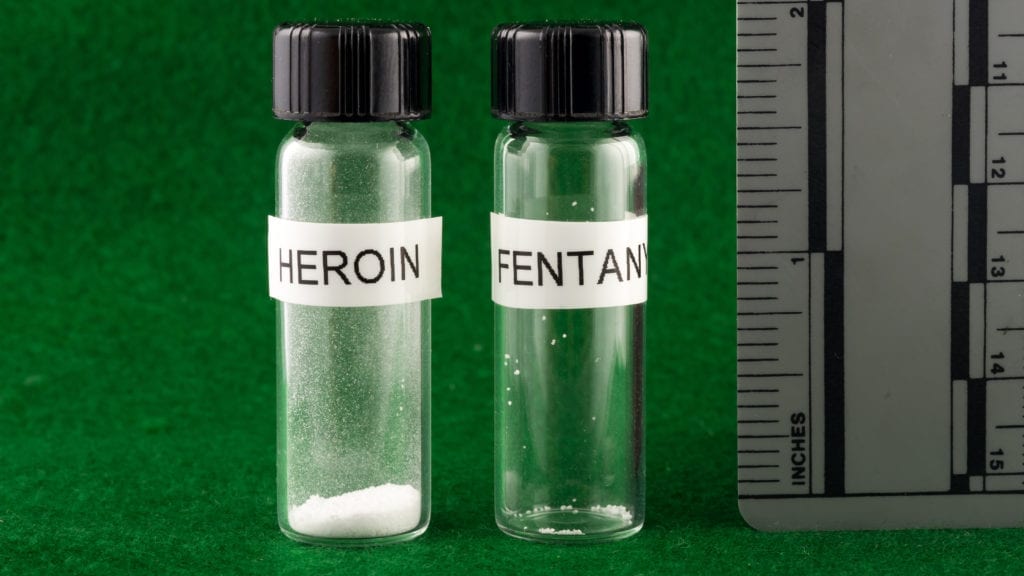 Why fentanyl is deadlier than heroin, in a single photo

Fentanyl was created in 1960 as a treatment for cancer pain and has taken over the black market because it’s cheap, easy to make and easy to transport. There’s no need to grow and protect acres of poppies; fentanyl can be cooked up in a lab. And because it is so potent — a few granules pack a deadly punch — it can be mailed around the world in small, difficult to detect packages. Drug labs in China take online orders from American users, or from traffickers elsewhere in North America who add the fentanyl to heroin and other drugs to bolster their effect, or press it into fake prescription opioid pills.

Because of its unprecedented strength—some 50 times more powerful than heroin—it can overwhelm even experienced drug users, leading to overdose. In certain markets, the mixture of synthetic drugs added to heroin changes frequently, further increasing the risk to users.

What’s worse, newer, even more deadly drugs are hitting the market. Enter carfentanil. The drug was originally used as an elephant tranquilizer, and is an estimated 100 times even more potent than fentanyl. Certain areas are now seeing more overdoses involving this potent killer.

In the face of these odds, it can be easy to feel like anyone battling addiction hardly stands a chance.

But here at Scottsdale Providence, we know that treatment works. We’ve seen lives re-built from the ground up, and people pulled back from death’s door.

We believe in what we do and are honored to fight the opioid crisis from the front line. Every life is a life worth saving. We will keep doing our part to support anyone fighting addiction, in any form it takes.

If you or someone you know needs help, reach out today.

Christina Rock is a Seattle-based writer and photographer with a deep affection for late sixties music, strong coffee, and days that go better than planned.

GET HELP
It's not the end. It's the beginning.
VERIFY INSURANCE
GET MORE INFO
Is it Time for a Screen Detox?
New Year, New You? How to Make Resolutions That Stick
Home for the Holidays: Advice for Dealing with Difficult Families
What Is Unique About Scottsdale Providence Recovery Center?
Can You Be Addicted to Shopping?
The Science of Gratitude
Is Neurofeedback Therapy Right For You?
How to Survive the Holidays Sober
Everything You Need to Know About Seasonal Affective Disorder
How to Know it’s Time for Rehab
More Than a Feeling – Why Gratitude is the Cure for What Ails You
Life 101: Going Back to School in Recovery
Anxiety in America is Skyrocketing
A Team You Can Trust: Meet Our Staff
Is a Sober Living Home Right for You?
Jump for Joy: Mental Health and Your Workout
How to Build a Meaningful and Intentional Morning Routine
In Sickness and In Health: Can You Get Sober When Your Partner is Still Using?
Is CBT Beneficial During Addiction Treatment?
How to Stay Sober Long-Term